I was given the unique opportunity to represent muisc teacher training students from Czech universities at the EAS Student Forum in Tallinn. 28 representatives from 14 European countries took part. I would like to share the information on this important student meeting and outline its topic.

„Practical Approaches to Vocal Musical Creativity“ was one of main topics of the Forum. We were also thinking about possible ways of making Music lessons more interesting and how to adjust them to the needs of today‘s children and the youth. „Student voice“ was looked upon from two different perspectives. Exploring the voice as a musical instrument was the first one and for this we had the chance to try out vocal improvisation under the leadership of Anne-Liis Poll, the foremost vocal specialist from the Academy of Music and Theatre in Tallinn. The method is based on the quick switch of voiced and voiceless speech sounds of a mother tongue. We tried out vocal improvisation with Estonian vowels and consonants. First of all, we used our speech tone for random combinations of voiceless consonants. In certain cases some nice rhythmical variations arose. Then we used Estonian vowels for interchange between a chest register and a headvoice. By this we investigated the possibilities of vocal colour. Improvisation with pairs of voiceless-voiced speech sounds (S-Z, Š-Ž, P-M, T-R, etc…) was the last task. Collective improvisation was especially interesting. Certain gestures were agreed on beforehand and we followed these gestures in groups while employing vocal or rhythmical ostinato. Face to face improvisation was incorporated into this vocal or rhythmical background. Apart from the degree of our spontaneity, we had the possibility to try out one of the creative processes in practice – fluency.

The metaphorical meaning of the term „student voice“ was the second perspective. Sarah Hennessy, from the U.K., and the newly elected president of the EAS and the coordinator of the EAS Student Forum in Tallinn, gave a PowerPoint presentation called Student Voice in Compulsory Education. Her aim was to conisder the problem of where and when the student voice might be heard in education, what the benefits and difficulties might be. She said that we could find concepts which relate to this idea, such as Creativity, Thinking skills, Learning to learn, Personalisation and Differentiation, in many policy documents and curricula.

The traditional model puts the teacher into the centre. New ideas, however, advise us to weaken the dominant role of the teacher and to focus more on the learner. The teacher should be able to advise, support, listen and assess. It is especially good when a teacher is also a friend of children. Another thing in question is the relevance of teaching methods and organisational forms of a lesson. When we think about the ways we teach, then our methods and work with children will be more appropriate to their requirements and needs. Last but not least, we have to keep in mind the rights of children and help them develop key the competences that are crucially important in the changing conditions of the 21st century. Neither should we forget practical experience that every child should carry from the school environment. The feeling of belonging increases motivation of children which improves their performance. Support of student voice leads to the development of their self-confidence, self-reliance and skills that they need for life outside school. This can be realized under certain conditions: classes have to be smaller, resources more flexible and lessons more varied.

Sarah gave us examples of projects which give students greater control over their learningand thus, takes into account their wishes and needs (see www.musicalfutures.org.uk and www.room13scotland.com). The Reggio Emilia movement in Italy is also a good example for very young children.

What might these ideas mean for today‘s music education and its impact on the present-day youth? Student voice helps develop musical identity, creativity, participation and offers diversity of skills, activities, muiscal styles, traditions and contexts.

After two-day-long discussions, we developed a way of presenting our ideas on these topics to the whole audience of the conference on 2nd July 2009.

I would like to present the conclusions of the group I was in. We were thinking about the meaning of the concept„student voice“. We came up with a short definition – to us, student voice means to give our students bigger freedom of choice in all parts of a school-life by paying attention to their needs and wishes“. We agreed that nowadays we are often witnesses of freedom without boundaries. That is why we foreshadowed problems that might be hidden in such definition. Students might experience confusion due to overwhelming amount of freedom being given all at once. We were well aware of the fact that some students might abuse their freedom. It is often the case that instead of looking for their own musical identity and developing their creative thinking, students intend to please the teacher by making choices according to the teacher‘s preferences. That is why freedom needs to be bounded. To include some practical aspects, we thought about ways to promote our students‘ individuality and lead them to self-responsibility. As Jan Ámos Komenský stated in the 17th century, it is good to proceed from easier tasks to more difficult ones. The teacher should not only be able to support choices and new ideas of the youth but he/she should also accept them. It is good when a teacher can support children by his/her genuine interest in them. We agreed that the teacher should be open to new methods and last but not least, should build creative atmosphere in which new ideas can be realized. The whole presentation was outlined in such a way so that there was some space to thoughts about how we teach and whether our methods are relevant to new conditions of 21st century.

I considered the team work and efforts to reach consensus as the most beneficial during the whole preparation for the final presentation. Each of us came from a different background, that is why opinions differed as well. I valued most the variety of views and I believe that the final presentation was not the most important point. More important was the way we reached the final presentation. The process of looking for a common goal, communication skills, mutual respect, tolerance of difference and respect of foreign cultures were all important moments during the course of the whole meeting. We were given the opportunity to try out ‚student voice‘ in practice. We had freedom while making groups, freedom in discussions and also during the final presentation. The coordinators of the Forum stepped aside but they were observing everything, gave us a piece of advice advice when needed or they guided our discussions. Every voice was equal and everybody could express himself/herself freely.

It was a privilege for me that I could take part in 7th European Student Forum in Tallinn as a representative of a post-Communist country of the former Eastern block. It is a big progress that students from these countries can cross borders of their homeland, freely express their opinions and build the European academic field together. The EAS European Student Forum significantly contributed to the thought of united Europe and enriched its participants with a diversity of views that are subsequently modified and imported into developing music-educational systems in Europe. I also had the chance to present main ideas of the Student Forum and Congress in Tallinn in the Czech press. I am glad that Czech and Slovak students have the opportunity to participate in initiatives around the whole Europe because we share a rich music tradition that we want to pass on. Not only in this aspect was the mission of 7th European Student Forum in Tallinn fulfilled. This international experience has brought me, apart from new stimuli for my diploma thesis, new views and suggestions for my music-educational practice and has drawn closer problems of present-day music systems of schools in Europe. 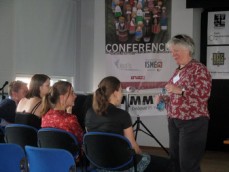