by the Organisation Team at Mozarteum University Salzburg 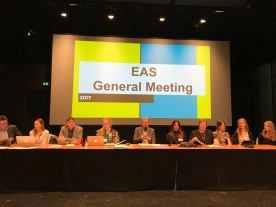 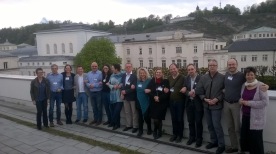 The idea of hosting an EAS Conference already arose two years ago. This starting point was followed by thousands of emails, hundreds of discussions and ideas, dozens of skype conferences and strategy meetings and led to four days full of sharing ideas and building networks, a very intensive time at the Mozarteum University here in Salzburg.

Salzburg2017 was a combined EAS and ISME Regional Conference and a great pleasure for us, that the whole ISME Executive Board held their meeting in Salzburg and attended the conference. The EAS Board and the ISME Executive Board used this opportunity for an exchange of opinions and ideas.

In the end, we received 208 papers from 39 different countries for the blind peer-review. From these submissions, the internationally composed Scientific Committee finally accepted 117 lectures, 5 symposia and panel discussions, 19 posters, and 12 workshops to be presented at the conference.

The 25th EAS Conference took place from April 19 till April 22 and was officially opened by a ceremony in the “Solitär” concert hall with speeches by regional politicians of the state and the city of Salzburg, the deputy chancellor of the Mozarteum University Salzburg, Sarah Wedl-Wilson, the EAS president Gerhard Sammer, the ISME president Lee Higgins and Monika Oebelsberger, head of the organization committee. As the conference organizer, she gave a short introduction to the theme of the conference.  The opening ceremony was accompanied by a music performance of “(Im)Possible Music”, a joint (ad)venture of Andreas Hofmeir, his tuba class and the recorder consort of the hosting university.

During the conference, three keynote speeches with the following titles took place: Susan O’Neill (CAN): Exploring a “Learning Lives” Approach to Connection and Collaboration in Music Education

Ulrich Leisinger (AUT): Between Text Book and Learning by Doing: How Musical Composition was ‘Taught’ in the Bach and Mozart Families and the Consequences for Music Education in the 21st Century

Andreas Lehmann-Wermser (GER): Why Some Joint Ventures Are Adventurous

All keynote speeches were streamed and videotaped by staff members of the Mozarteum University. Aside the conference book, the conference schedule was also available in a digital form through a conference internet application.

The 15th EAS Student Forum was held from April 18 – 21 alongside the main conference. 27 delegates from 17 different countries exchanged ideas and songs from their home countries under the lead of Oliver Krämer (Rostock), Branka Rotar-Pance (Ljubljana), Lisa Grüneis (Salzburg) and Jonė Girdzijauskaitė (Vilnius).

After welcoming all the students with a traditional Austrian song, the introduction round was started. In the evening, special food from different countries at the “Buffet of the Nations” was shared and the students got the chance to get in contact with other delegates.
The next day started with the workshop “Amadeus” held by Elisabeth Wieland (Salzburg), where they got an insight into the life and music of Falco. After the “Musical City Tour” through the old town of Salzburg the students participated at the opening ceremony.
The Keynote by Susan O’Neil formed the basis for the following theoretical discussion on the topic.  As preparation for the Student Forum Workshop, traditional songs and warm-ups were shared in small groups and selected afterwards. On the last day of the Student Forum, the delegates held a motivating and inspiring workshop for all conference participants. After the notes and reflections, the Student Forum was over, but what stayed were new ideas, perspectives and friendships.

Within the Doctoral Student Forum 11 students, at any stage of their studies and from all over the world, presented and discussed their projects in several aspects such as key issues, terminology, theoretic principles or methodology altogether in 5 forum sessions, which took place from Tuesday until Thursday afternoon. The sessions included peer led discussion and workshops given by Dr Mary Stakelum (Bath Spa University, UK) and Prof. Dr. Thade Buchborn (University of Music Freiburg, Germany) and culminated in a dedicated DSF poster session at the main conference. This presentation was very well-attended and though there were planned 60 minutes for the discussion of the posters with the conference delegates, after one and a half hour the conversation was still going on. – All in all the DSF was very successful and fore sure an enriching format for the conference as such as for the participants.

On Wednesday, April 19th, prior to the Conference Registration, School Visits have been organized. Attendees had the opportunity to visit schools in the Salzburg city area. They could choose from seven different types of schools according to their own pedagogical interest (e.g. elementary school with holistic music making, middle school for teacher training, secondary school with boys’ choir singing focus etc.). Fortunately, our offer was highly accepted: 80 people registered for the School Visits, and we even had a small waiting list. Participants could attend a music class and they entered into dialog with the music teacher after the lesson. All in all, we were happy about the good atmosphere and the feedback from our attendees.

Besides the numerous paper presentations and workshops we were amazed about the number of submitted posters (indeed 19). Due to this fact we decided to give the posters a more prominent place in the conference and held the presentation in the main gathering room (Solitär) before Friday’s keynote. Also on account of the large number a special format for the presentation had to be applied. So every presenter could use 1-2 presentation slides and  had only 60 seconds to deliver the main message of the poster. After the gentle sound of Tibetan cymbals (tingshas) as timekeeper the next presenter was to start attacca. The results were quite astonishing and time was kept perfectly. (Thanks to all presenters!)

To get more in depth with the posters and their authors two poster talk breaks were held in the afternoon in the surrounding gallery of the foyer where the posters were displayed throughout the Conference.

“Join us on a short musical tour of Salzburg” – it was a pleasant surprise that so many people followed our invitation on a cold and rainy day. In Mozart’s Residence Ulrich Leisinger briefly introduced us to ‘the sound of music’ in Wolfgang Amadé Mozart’s time. Our musical journey continued with a ‘leap backward’ into Salzburgian music of the late 17th century. Heribert Metzger, organist of Salzburg Metropolitan Cathedral played music by Georg Muffat (1653–1704) on “Hoforgelˮ in cornu epistolae, one of the four organs in the nave of the cathedral. In St. Peter’s Abbey  Markus Obereder, the Girls’ Choir of Musisches Gymnasium Salzburg and the Chamber Orchestra of Musikgymnasium Salzburg welcomed us with Missa sub titulo Sancti Leopoldi MH 837 by Johann Michael Haydn (1737–1806).

As a ‘gift’ to the participants in the EAS Congress the students had prepared a very special piece of music – GCC. A  Guided Collective Composition. Sixteen young students, between eight and sixteen years old, followed the invitation of their teacher Ludwig Nussbichler and assembled for a ‘joint adventure’.

A new board was elected during the general meeting on Thursday night. Nearly all former board members continued their work in the new board. Only one member left the board: Mary Stakelum.

A big thank you was given to Branka Rotar Pance and Oliver Krämer for their work with the students forum for several years.